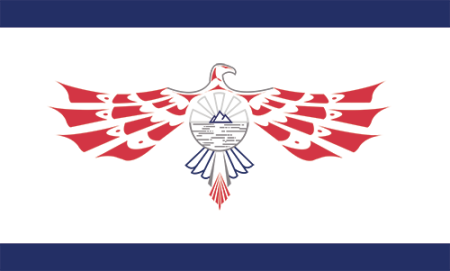 The Independent Sovereignty of Cascadia, commonly referred to as Cascadia, is a nation-state in the NW area of North America.

Founded upon the idea of free-markets, religious liberty, and respect for the environment, Cascadia is one of the most economically powerful and technologically advanced countries in the world.

This region of North America was first settled by hundreds of distinct native tribes comprising a vast, diverse cultural mixture.

In 1501, Eleanor XV (E15) sailed the length of the west coast of North America from the tip of the Western Penninsula to the Aleutian Islands and was responsible for the scouting of what would become several settlements along the continent. These settlements remained largely unconnected to the rest of the Empire and began forging relations with the indigenous tribes.

Starting in 1581 a mass exodus of pracititioners of several of the newly banned religions began to emigrate from Australia and its island colonies near the mainland to across the Great Ocean. Because of its temperate climate and generally peaceful native tribes, the coast of what would later become Cascadia became a haven for these relgious refugees.

The religious emigrants lived a largely independent existence from the Crown, until the acension of Eleanor XXII (E22) to the throne. On her 11th birthday, E22 led a large naval force to the coast of Cascadia in an effort to bring the settlements back into the main fold of Empire governance. She stationed a series of governors in each of the major population settlements of Cascadia who reported directly to the Empress and answered only to her.

The power that each governor was imbued with, and the accompanying lack of accountability, led almost exclusively to widespread corruption and abuse of power.

In 1667, after a series of incidents involving the governors of Pørtland and Si’ahl and their embezzlement of thousands of sovereigns from the local treasuries, a series of popular uprisings was arranged. The conflict escalated, and the governor of Si’ahl ordered the killing of 51 children of families linked to the uprising. This move further galvanized the population and the morning after the incident the governor was dragged from his palace and each family was given the opportunity to remove a part of the govenor’s body. The pieces were then wrapped in a flag of the Empire, boxed up, and sent by cargo ship to the Empress.

After this provocation, E22 dispatched a pirate loyal to the crown, Captain Riggins, to put down the uprising by any means necessary.

Riggins did so with ruthless efficiency and for several weeks afterwards it looked as if the nacent rebellion was at an end.

On August 7th, 1667, however, an attack was orchestrated by a group of guerrilla fighters, led by a man named Hugh Mackey. Hugh Mackey and his guerrilla fighters stormed the palace in the middle of town and captured Captain Riggins. The following morning, in front of a wild and cheering crowd, Hugh Mackey made a public display of tying Captain Riggins up to the flag pole, which no longer bore the flag of the Empire of Australia, but rather a hastily made flag of their own.

“Aren’t we all,” replied Hugh Mackey.

Using a blade, he then disenbowled Captain Riggins and left him there to bleed to death.

This began a brutal four-year war between the Empire and its breakaway Western American colonies. After tens of thousands of casualties on both sides a peace treaty was reached that partitioned Western America into two distinct areas: Cascadia and the Western American Empire.

The Empire of Australia officially recognized the Independent Sovereignty of Cascadia’s independence on September 4th, 1671. That date is celebrated every year in Cascadia as Sovereignty Day.

Today, Cascadia enjoys one of the most robust economies in the world. It is a technological innovator that issues more patents every year than every other nation on Earth combined.

Cascadia also boasts the second largest economy in the world, behind the Empire and ahead of China, the Union of West African States, and Gran Columbia.

The Government of Cascadia is a Parlimentary Republic with three branches of government: Legislative, Ministerial, and Judicial.

The legislative branch, the Council of Chiefs, is a unicameral body directly elected by the people of Cascadia. Cascadia is broken into 150 areas with roughly equal population that each elect a legislator. Legislators serve for five year terms. This branch is responsible for creating and enacting laws throughout Cascadia.

The Judicial branch, the Council of Elders, is a 19-member gorup who hear entreaties and appoint sub-councils that oversee disputes between citizens, organizations, and the government. The Council of Elders is responsible for the ultimate interpretation of the Cascadian Constitution. The Council’s decisions are binding upon the nation.

The Cascadian Constitution draws upon the work of the Scottish philosopher Adam McDonald who argued for religious toleration and freedom of conscious in governmental affairs and in society more broadly.

The core tenets expounded in the constitution are as follows:

All people have the right to choice in how they are governed regardless of sex, religious belief, or social status.

All people have the right to make of their lives whatever their skills, talents and training will allow of them so long as they do no undue harm to others in the process.

Although officially known for its progressive social attitudes, free market, and liberal attitudes toward religion, Cascadia is fraught with corruption that is rumored to reach into the highest echelons of power.