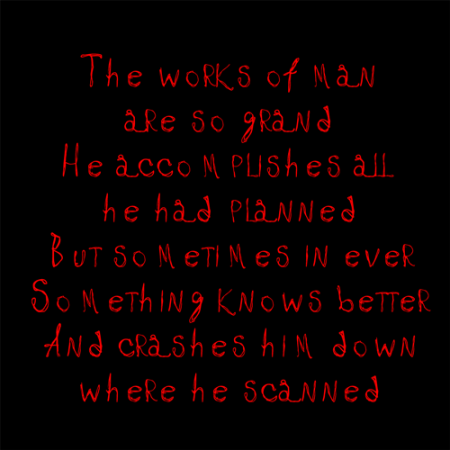 In 1916, in the logging town of Powder Mill, a series of unusual and unexplained murders took place.

In all, 23 people were found murdered and another 12 people disappeared whose bodies were never found.

Among the 23 confirmed murders was the owner of the Mill and all the surrounding property, Julian Powder. Julian’s lover, Esperanza London, was also murdered during this time, but the circumstances of her death are suspect and may not have been in connection with the other murders.

The murders began on April 1st, 1916 with the disappearance of Joe Jones and Marty Teufel, two foremen at the Powder Mill. Both men were reported last seen late in the evening on the 1st at the Powder Pub. The bodies of both men were never recovered. Until later, it was believed that both men left the town of their own accord having earlier in the day had a disagreement with the Mill’s owner.

Three days later Alex Martins was found hanging from a tree outside the Powder Pub. Martins eyes and internal organs had been removed and were never found.

The next day James McIntyre was found dead in his room. McIntyre had been decapitated and was posed sitting at a table holding a hand of cards. All of the cards in his hand were Rabbits. McIntyre’s head was never found.

Two days later Bernard “Bark” Roughly, Sam Johnson and Seymour Stein were found in the Mill’s bathhouse dead. It was found that the water in the tubs had been replaced by blood. The amount of blood in each tub was considerably more than the amount of blood in one human being, prompting rumours that there must be other victims in the town, but none were ever discovered.

It was at this time that workers in the mill began to abandon their posts. Julian Powder begged for calm and offered bonuses to any who stayed on. While many left, many stayed in hopes of collecting the money.

On April 10th Alicia Simple and John Wang were found in the town mess. Their blood and organs had been removed, they were posed in serving positions, and it was discovered that each of the ovens contained meat pies that included the missing organs.

April 12th saw seven members of the overnight crew go missing. All seven were found dead along the road out of Powder Mill. They were posed in running positions as if fleeing town.

April 13th saw the death of Esperanza London. She was found beaten to death in her room. The nature of the death seemed suspicious to many. Several believed that Julian had killed Esperanza in a jealous rage after discovering an affair between her and another mill foreman, Jerry Laughlinson.

Jerry Laughlinson disappeared on April 13th and his body was never found.

April 15th saw the disappearance of 11 different people from the mill. Each of the victims appeared to have been taken from their beds in the middle of the night while loved ones slept nearby. The bodies of each of them were never found.

At this time nearly 75% of the workforce in Powder Mill had deserted, gone missing, or been killed. With only a skeleton crew left most mill operations stopped. Burning through money quickly while shuttered, Julian worked with a local Pørtland sourcing company to secure more workers, and on April 17th a new crew of 27 workers arrived.

April 18th saw five of the new arrivals killed. The bodies of the men were arranged in a way that spelled the word “flee”.

The death of these latest workers caused the Wimahl Sheriff to declare the mill closed for public safety reasons and the town was evacuated completely. On his final rounds through the town, the Sheriff discovered Julian Powder’s body in the man’s office. Powder’s eyes had been removed and his body had been posed as if writing. On a paper pad in front of Powder was written a poem in blood:

The works of man are grand

He accomplishes all he planned

But sometimes in ever

And crashes him down where he scanned

The murders were never solved and many of the bodies of those who disappeared were never located.

The Powder Mill Expanse has been largely abandoned ever since.